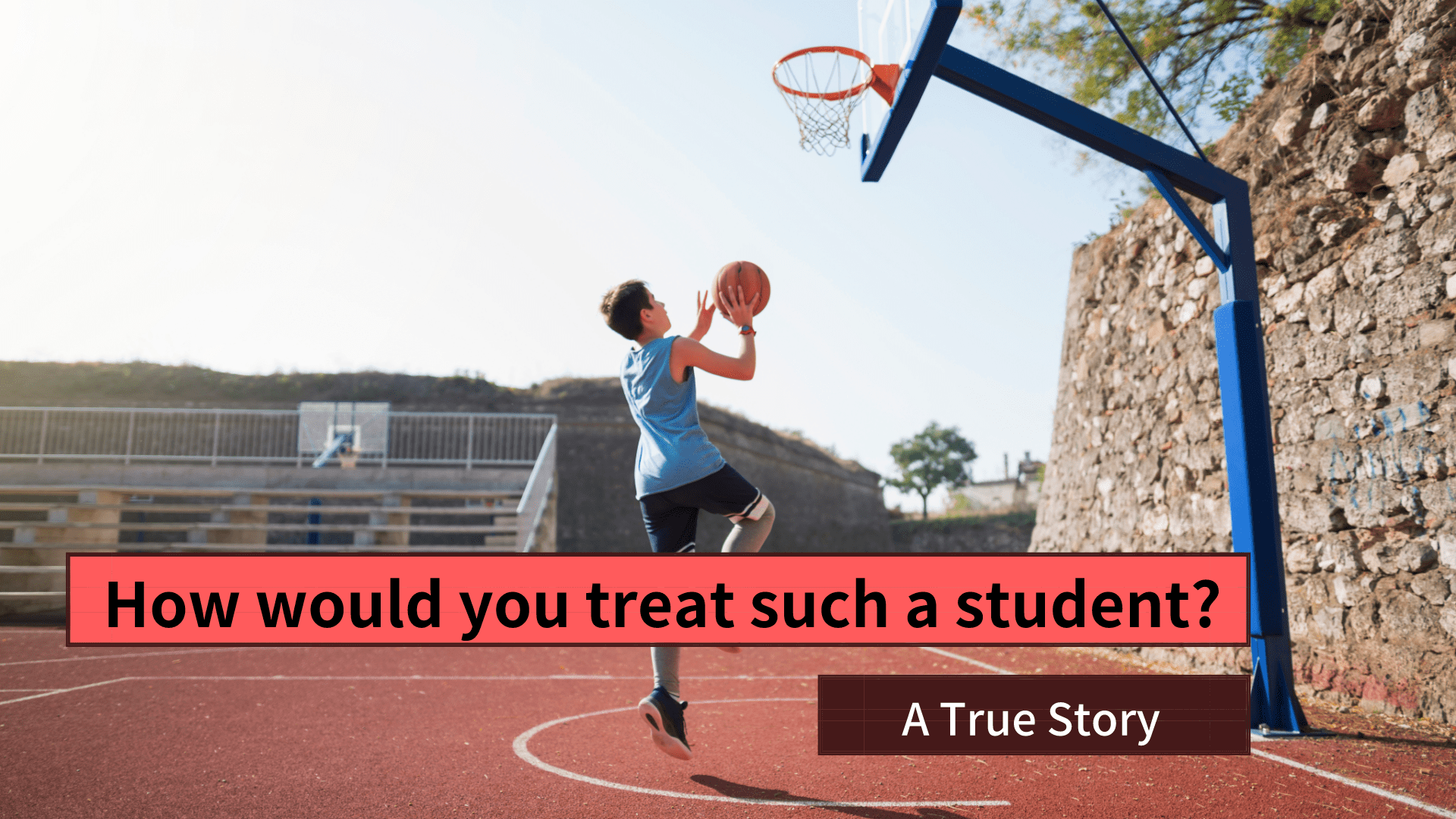 Hello, my name is Kelly. Your guide to being your own boss. Today I will tell you a true story.

There was a junior high school student who was very introverted and did not like to talk in school. He seemed to be unhappy all the time. If you were a physical education teacher, how would you treat him?

One day, the physical education teacher asked the student to go to the playground to participate in the school basketball team selection after class. On the basketball court, this student went on a rampage, desperately trying to get the ball, but it was all in vain and eventually lost. He left silently.

The next day, the physical education teacher said that he was missing an assistant in organizing the basketball team training, and asked the student if he was interested. The student reluctantly nodded in agreement. Since then after school, the student went to the playground to help the teacher, and when the teacher taught the basketball players, he secretly followed, but behaved indifferently.

Under the careful guidance of the physical education teacher, the student improved his skills and was successfully selected as the school team members until graduation. In high school, the student also often came back to help and trained younger players. The story was not over here.

One day, the student came to see the physical education teacher and said that he might not be able to help out for a while because he was about to go to jail. The physical education teacher did not criticize him, but said that a person should be responsible for what he did. “No matter what the situation is, you must maintain a fighting spirit, believe in yourself, forgive yourself, and think about how you entered the school basketball team.”

This story was a true story of my respected mentor, who was far away in heaven. He told it to me when I encountered the trough of life.

He didn’t like to talk at the time because his parents were killed in a car accident, leaving him and his two younger brothers alone. He went to school with injuries because some students bullied his younger brother, and he stepped forward to protect his younger brother. Later, he went to jail because he accidentally injured one of the students while protecting his brother. However, my mentor did not bow to fate. After he was released from prison, he chose to find a job and did not enter the university because he had to support the family.

With his continuous efforts, he became a senior executive in a multinational company. As the company went public, he realized financial freedom at the age of 32. My mentor did not forget the physical education teacher. In fact, he has been helping the family of the physical education teacher anonymously. In the last year of his life, while fighting against cancer, he was studying for a doctorate degree, and he did not forget to guide me on the problems I encountered in the entrepreneurial process. Thank you so much, my dear mentor! I really appreciate your guidance.

Many times, we always look at people with colored glasses unconsciously. In fact, we don’t know what others have experienced. Remember to treat others nicely and respectfully. Sometimes our little effort may be of great significance to others. On the other hand, there are always unsatisfactory things in life. Get used to co-exist with difficulties. When encountering problems, solve them, let go, and continue to grow!

Welcome to the Mans International Be Your Own Boss program

Mans International “Be Your Own Boss” Program is designed to help people from all walks of life who are committed to changing their way of thinking, improving their abilities, and achieving financial freedom and time freedom.

If you are determined to achieve financial freedom and time freedom through long-term efforts, then please:

Mans International Be Your Own Boss program – Value #1

Mans International Be Your Own Boss program – Value #2

Mans International Be Your Own Boss program – Value #3

Mans International Be Your Own Boss program – Value #4

Q&A #2 – Why do we need to think independently?

3. Watch our challenges video series carefully and test yourself whether you know all the answers？

Challenge #1 – Which island do you want to live on and why?

Challenge #2 – How can you increase sales without increasing costs?

Challenge #3 – How would you respond?

Challenge #5 – Do you think human beings can think freely?

Challenge #6 – How many piano tuners are there in Toronto?

Challenge #7 – Why does the law require such regulation?

Challenge #8 – How would you respond?

Challenge #10 – Which size pizza would you buy?

Challenge #11 – Who should maintain orders?

If you think you can answer all the challenges, you don’t need to join this program. We wish you all the best!

If you have not figured out the answers to all the challenges, and are determined to continue to grow yourself with this program, please send your Linkedin profile link to info@mansinternational.com

We will schedule a one-on-one session with you. If you pass the selection process, you can pay to join the program.

Are you ready to become your own boss?

Back to Home Page

How to join Mans International Be Your Own Boss program?

Have you dreamed of being your own boss?

Mans International “Be Your Own Boss” Program is designed to help people from all walks of life around the world who are committed to changing their way of thinking, improving their abilities, and achieving financial freedom and time freedom.

First of all, I’m sorry to tell you that it takes a long time to realize financial freedom and time freedom. If for whatever reason, you have obtained a large amount of wealth,  it doesn’t mean that you achieved financial freedom automatically. Because you may not have the ability and psychological capacity to manage large amounts of wealth, the money will be consumed at a rate you can’t imagine.

You might say, can I just ask a financial professional to help me take care of my wealth? The question I asked was do you have the ability to select an outstanding and suitable professional?

If you feel that you ALREADY have independent thinking and various skills, then you do not need to participate in this program! All the best!

If you DON’T agree with our values, please do not disturb！

Check Mans International “Be Your Own Boss” program values:

Value #2 – No complaints Watch the video

Value #4 – Never give up Watch the video

How To Join Mans International “Be Your Own Boss” Program

This program is an INVITE ONLY program.

Please read our “how to join” information page carefully.

If you meet the requirements, congratulations, you will embark on a new journey to financial freedom and time freedom under our continuous guidance.

If you are not ready yet, don’t worry. Every week, we create content and open it to the public.

You can either send an email to info@mansinternational.com and we will send you the latest content regularly.

Every year we make plans. Every day we receive tons of information and learn a lot of knowledge, but why most people still can’t make choices that are beneficial to themselves in the long run, achieve their goals, and become a better version of themselves?

Think about these questions when you have time.

Resource page – Mans International Be Your Own Boss program

Back to Home Page

How to join Mans International Be Your Own Boss program?

Mans International is a technology service company based in Toronto, Canada. We provide B2B Marketing and Investment as a Service to help corporate clients solve their pain points including but not limited to:

We have built a mature international technology ecosystem in North America, China, the United Kingdom, the Netherlands, Singapore, South Korea, Japan and Brazil.

Through us, our clients can access around 300 corporate customers and more than 100 industrial funds and investment institutions at the same time. This one-to-many model saves you a lot of time and early business development costs, and helps your company grow and iterate quickly.